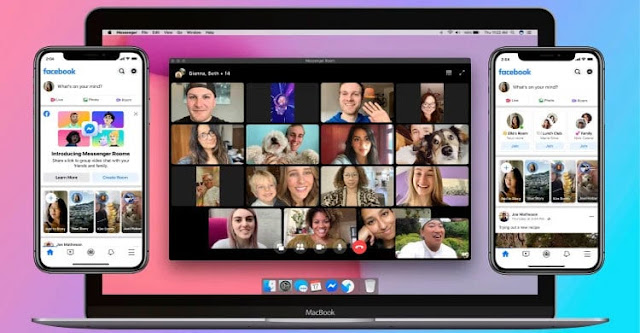 This time the Facebook room is open for all Facebook users. This room feature allows up to 50 people to have video conferencing together without any time limit. News Reuters

This new feature added by Facebook is a lot like live video broadcasting. Whose conference messenger is created in imitation of Zoom.

With this feature, even if no one is using Facebook, you can join the video calling of the messenger room through the web page using the invite link.

The demand for video conferencing has increased as the whole world has gone into lockdown due to the coronavirus epidemic. People are using video calling feature extensively. To take advantage of that opportunity, this "room" feature of Facebook.

Other social networking platforms are not far behind in meeting the needs of citizens and innovating. In line with the demand, Google's parent company Alphabet Inc. has introduced the feature "Google Meet" in free video conferencing.
Since Thursday, Facebook has fully opened the video conferencing feature "Room" to all users.

Android operating system users can use this feature by updating the Messenger app from the Google Play Store.

Not only Android, but also Windows, iOS or Mac users can use the video conferencing feature. For this all the users have to update their messenger app.

Earlier in April, Facebook had introduced this feature in an experimental way called Messenger Room.
Getting Info...

How to unlock iPhone without passcode